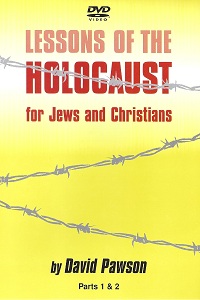 Lessons of the Holocaust for Jews and Christians

Why did Hitler hate the Jewish people?
Why did German-speaking Europe back him?
Why was the church largely silent?
Why did the Allies do nothing about it?
Were the Jews themselves in any way responsible?
WHY DID THE GOD OF ISRAEL ALLOW IT TO HAPPEN?


These are the questions dealt with in this DVD, which asks what Jews and Christians need to learn from the ‘Shoah’ or Holocaust and whether these lessons have been learned or are being ignored at our peril. In particular, the twin dangers of tradition and assimilation are addressed.